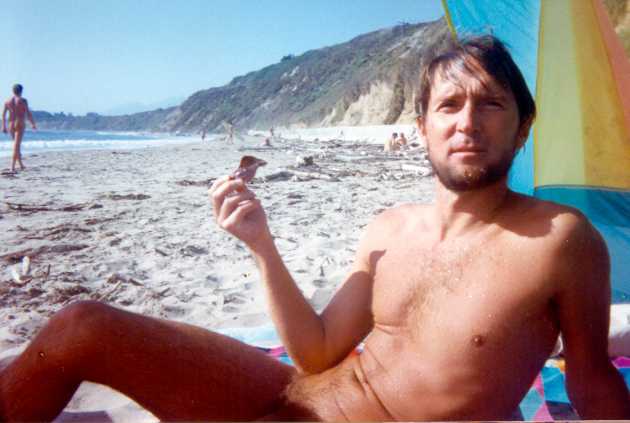 See some of my ocean wildlife photos.

I have not been to Rincon lately, but I have heard from others that there have been frequent raids. I suggest caution if you go. This club has recent reports.

How to get there: To find Rincon take 101 and exit at Bates Road. If you're heading north-west that's 4.4 miles past Sea Cliff at call box 101-432, turn left, go under the freeway and turn right into the parking lot. If you're heading southeast, Bates Road is 1 mile past the Lake Casitas exit, near call box 101-07, turn right and right again. South from the bathrooms is an asphalt path that leads down to the beach. There's also a stairway east of the asphalt ramp. Nudity is tolerated west of the rusty drain pipe that you see extending down from the cliff. If you're facing the water, west is to your right.

I first visited Rincon July 1, 1995 and I've been there a few times since. The beach runs from east to west. It was a narrow beach that was littered with seaweed and rocks, except against the sea wall. Also I have always found this beach littered with fist-sized patches of tar. It is easily removed with baby oil or tanning oil. Everyone was lined up against the sea wall. The waves were very small and breaking near the shore, definitely not for surfing.

The male/female ratio seemed almost balanced and I didn't notice any gawkers or offending cameras. I learned on a later visit that they hide on the road above. Apparently the narrow sand makes it difficult to spy comfortably.

There are a few houses visible to the east. Apparently one of those is the source of occasional complaints. They would have to have a telescope to distinguish the offending body parts across that distance. The beach is right on the county line of Ventura and Santa Barbara. The houses are in Ventura County and the nudity is in Santa Barbara County. I think it must be Ventura police that respond. One day in 1998 I noticed that everyone suddenly put their clothes on. We played it safe and did the same, and soon undressed again. I saw no police, but if the regulars get dressed suddenly, something's up.

There were tide pools that began about where the surf met the sea wall and continued west. I did some free diving and found a few sand dollars. I saw rocks covered in small sea anemones. I also caught glimpses of many small fish.

There were quite a few dolphins. I didn't see any live seals, but there must be some at times, since there was a dead one, mostly buried, on the beach.